This is a short guide explaining the objectives and background/theory (kind of) of lppl and some best practices (painfully!) accumulated over time.

No other existing PPL accomplishes all of these objectives.

Probabilistic programming elevates the modeling of uncertainty to a first-class programming language construct and automates inference over these models. Uncertainty is important because most real-world phenomena are either fundamentally random in nature (e.g., many physical processes) or are so magnificently complex that the only tractable way to reason about them is to model them as being random. Automation of inference is important because – no other way to put it – doing inference “well” (accurately, as precisely as the data allows, quickly, and memory efficient-ly) is hard. It’s also almost entirely orthogonal to the modeler’s objectives of describing phenomena and asking questions; it’s the answers that matter, not how the questions are answered. Therefore, automating inference lets modelers save precious mental energy.

lppl is a record- and sample-based probabilistic programming language (PPL). “Record-based” means that random choices taken during the execution of a program are recorded in a data structure (the “record”) as they are taken. (This is more commonly known as “trace-based”, language I eschew for reasons I describe presently.) “Sample-based” means that inference is accomplished by drawing random samples from probability distributions. There are many other ways of implementing PPLs; a good reference on the subject is van de Meent et al. (2018). Briefly, other alternatives include compiling a probabilistic program to a graph data structure as an alternative to a record/trace-based implementation, and using other inference methods (e.g., message passing, variational inference, discretization and exact inference) as an alternative to sample-based inference. lppl is record- and sample-based for the following reasons:

Here’s a high-level graphic displaying how lppl works architecturally. I’m not using C++-specific syntax in this diagram because the same architecture could be implemented in any language. 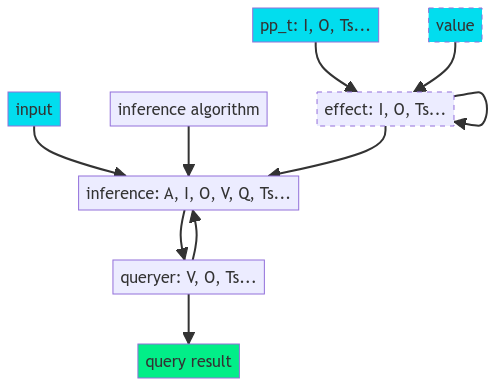 Blue boxes denote things that the user has to (solid borders) or may choose to (dashed borders) create for themselves. Namely, the user has to write a probabilistic program that has an input type I, an output type O, and contains distribution types Ts..., has to specify an input to the program, and may choose to specify additional values that occur within the program. The green box is the result of a query – what you get at the end. The grey boxes are stuff that lppl automates for you (though you can certainly implement your own examples of each).

All probabilistic programs (pp_t<I, O, Ts...>) are callables with signature (record_t<Ts...>&, I) -> O. Yes, even purely generative ones take a single input of type I. Sorry, that’s just how it is, pass an empty tuple or something if your program really doesn’t take any inputs. They output something of type O. They are parameterized over the distribution types Ts... contained within them. This is because it may be possible to specialize inference algorithms or query logic based on the types of distributions the program contains. For example, a probabilistic program containing only Normal distributions is fundamentally different from one that contains both Normal and Gamma distributions – in the first case, I know that I can create a variational posterior for the program without applying any transformations to any latent rvs, while in the second case I need to apply a log transform to the Gamma rvs.

You might want to change how your probabilistic program is interpreted. For example, you might want to additionally specify that the value of "n_clusters" in your open-universe clustering model is actually equal to 6 for a particular experiment. You can apply an effect to the probabilistic program that changes the interpretation of sample and/or observe calls. For example, you could write

to achieve the desired outcome here.

After you define your model, you probably want to query some of its properties. For example, you might want to know the prior or posterior probability distributions over its output values, or over values sampled at a particular address, or you might want to know the optimal value of a function evaluated with samples from the posterior. Though often used jointly in answering operational questions such as these, querying a probabilistic program and performing inference over that probabilistic program are actually nearly independent activities, even though many PPLs treat them as nearly synonymous.

In lppl, inference corresponds to sampling values from the probabilistic program and assigning weights (real numbers) to those values. Depending on the inference algorithm used, that weight is either

It is the user’s job to understand the semantics of the weight computed by an inference algorithm. If in doubt, read the documentation!

By default, inference is an online algorithm that has constant memory complexity (constant in the number of samples). Inference algorithms, implemented as subclasses of Inference, overload operator(). Calling operator()(I& input) or operator()(I& input, P& proposal) (depending on whether the inference algorithm used requires a proposal distribution, which is declared using has_proposal) iteratively updates a Queryer subclass whose job it is to compute the query results. These queryers can either maintain the constant memory complexity – e.g., as does WeightedMean – or can persist samples for later computations.